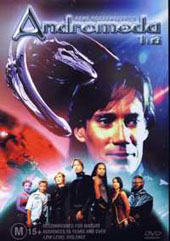 Due to COVID-19, we're unable to accept orders for non-essentials items at this time. Learn more...
Set in deep space, Gene Roddenberry’s ANDROMEDA chronicles the efforts of Captain Dylan Hunt (Kevin Sorbo) and his crew as they try to restore a government that once presided over an extended period of peace and prosperity. Betrayed from within, the civilization spanning three galaxies was plunged into chaos. After plunging into a black hole, Dylan and the remaining crew of the “Andromeda Ascendant” are rescued by the salvage ship Eureka Maru to discover that 300 years have passed, and their entire world is in ruins. It is now up to an eclectic band of heroes to reunite the diverse cultures of the known worlds.