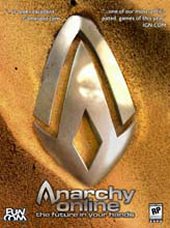 Unavailable
Sorry, this product is not currently available to order
Anarchy Online is a massively multiplayer Internet role-playing game featuring thousands of players simultaneously in a persistent, living universe. Inhabiting an alien planet in a distant future, players - in groups or on their own - are free to explore a stunningly detailed sci-fi environment, converse and socialise with other players, solve numerous quests, and battle strange and otherworldly creatures!

The year is 29,475 AD - and the place is Rubi-Ka, a brave new world on the outer fringes of known space. As a new citizen and colonist, you are propelled into perilous and unfamiliar territory, and you will soon have to decide where your allegiance lies. Whether you sympathise with the rebel clans or with the corporate behemoth Omni-Tek, your decision will affect everyone. On this world, the future is in your hands.

* An epic story-arc spanning the four-year lifecycle of the game, shaped by individual player actions

* Thousands of players interacting simultaneously - chat, socialise, quest or fight with fellow gamers from across the globe!

* Customise a player character in a number of different ways, including choice of breeds, character classes, skin colour, clothing, equipment, and express yourself with more than 40 different social animations

* Auto-generated content, individually tailored to each player's talents and skills - in addition to player-generated quests

* Learn and improve a huge number of customisable player skills, ranging from lock picking and ranged combat, to computer literacy and nano technology

* The game-world is represented in 16-bit color, real-time 3D, and further enhanced by the power of 3D-accelerators

* Funcom will create a deep and evolving story where thousands of players participate in both the day-to-day happenings, and the big epic conflict between the mega-corporation Omni-Tek and several rebel clans. The player decides who his or her character will support.

* You are represented in this world by a customizable avatar, chosen from a set of breeds - each with unique graphic features. You will be able to customize skin tone, clothes and more.

* Each character is defined by 6 abilities and 40 core skills, with a great range of specialized skills further defining them. This implies that when you have chosen the shooting rifle skill, you could specialize further in a specific choice of rifle. Or, you could focus on being very resistent to a certain type of poison.

* To expand the role-playing element, Anarchy Online has an extensive system for joining and making teams, clans and Omni-Tek® departments.

* Teamwork is rewarded in gameplay, with experience and skill bonuses. To work together benefits both low- and high-level characters. A long-lasting team will evolve through the reward system.

* The game has a variety of mutant, alien monsters to vanquish in combat with a wide selection of futuristic equipment.

* You may participate in both pre-defined and generated quests. There will be enough meaningful quests for everybody.