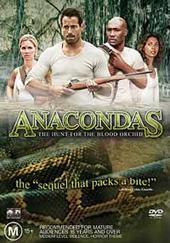 Anacondas: The Hunt For The Blood Orchid

The hunters will become the hunted. A scientific expedition sets out for the island of Borneo in search of a flower named the Blood Orchid.

Reports say that this flower can lead to a longer life. But what they find inhabiting the rainforest of Borneo are a group of anacondas. But they aren't ordinary… the Blood Orchid made the anacondas longer, faster, and smarter. Now the scientists must find a way out of the rainforest by outsmarting, outrunning and outliving the anaconda.