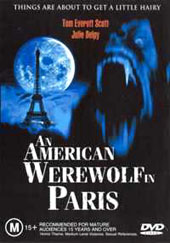 An American Werewolf In Paris

Something is amiss in the seedy Paris nightlife.

An unspeakable myth is stalking the ancient catacombs that criss-cross the foundations of the city. Into this dark arena of gruesome demise and lurking menace strut Andy, Chris and Brad. First night in Paris the guys scale the Eiffel Tower to watch Andy bungee jump off. But before he jumps, a beautiful Parisian girl called Serafine attempts to end it all by leaping to her death. In a split-second of insane boyish bravado Andy, still attached to a bungee-line, rescues her in mid-air. The moment is electric, but before he can make a note of her vital statistics he is concussed by a passing steel girder.

Andy awakes in hospital groggy-headed but with a mission. With only the suicide note his friends found, Andy traces his mysterious girl to her house where it becomes apparent that there is more to Serafine than it seems. She has a secret that will either change his life forever or end it horrifically.