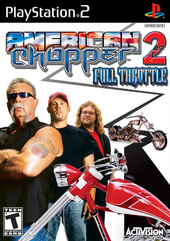 American Chopper really is a difficult game to recommend or discourage. On one hand, the experience in the shop is great. There are tons of ways to customize bikes, and every character has their own storyline that keeps the game feeling like the show. Models look great, and production value is strong. On the other hand, however, is the gameplay, which feels like a clunky version of GTA. A game like that gets cut some slack since there is just so much aside from driving, but in a situation like this there should be way more strength in the racing portions. If I spend a ton of time building a bitchin' bike, I expect to have a blast riding it. It is more fun to tweak your chopper than it is to ride it, and that is a flaw in the design's execution. The game needs to be at 50/50, and right now it is about 80/20 towards designing rather than driving. If American Chopper played as well as it felt, we would be in for a serious contender for shelf space. Instead, it is a flawed licensed title that looks and acts far better than it plays.

It's bigger, badder and better than ever with more of everything you love about the original game. Play as Paul Senior, Paulie, Mikey and Vinnie and experience the pressure and drama of the Discovery Channel hit TV series as you build four custom choppers for a motorcycle competition. Deal with the conflicts and problems that arise when you compete in family battles, races and other biker challenges in order to earn your parts and respect from Paul Senior. Everything culminates to a final showdown - are your custom creations up to the challenge- FEATURES:
Release date NZ
March 2nd, 2006
Game Platform
Developer
Creat Studio
Publisher
Activision
UPC
9328878001792
Product ID
1511050