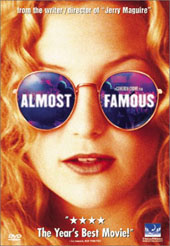 A 15 year old boy (Patrick Fugit) gets an opportunity to travel with a rock band, Stillwater on a 1973 tour. As a younger boy, his sister (Zooey Deschanel) and his widowed mother (Frances McDormand) had fought about the mother's control over the family and her denial of rock music. The sister leaves home and leaves the young boy her record collection, which immediately seizes his attention. As a teen, he makes record reviews for an underground newspaper. He submits those to Creem magazine writer Lester Bangs (Phillip Seymour Hoffman) and gets his attention. The two become fast friends and Bangs acts as his mentor as Rolling Stone magazine comes calling.