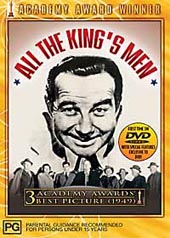 All The Kings Men

Drama about the rise and fall of a corrupt southern governor who promises his way to power. Broderick Crawford portrays Willie Stark, who, once he is elected, finds that his vanity and power lust prove to be his downfall. The film is based on the 1946 Pulitzer Prize-winning novel by Robert Penn Warren.