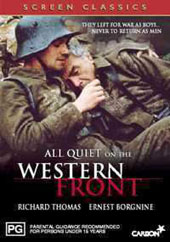 Many people make the mistake of thinking of this movie as a remake of the 1930 film classic. In reality, both movies are a visual telling of the 1929 novel by the same name; at different points in time. This 1979 film is just a retelling of that story, and it's obvious from its differences from the 1930 film.

Personally I like this version better…it's not overacted, it was filmed on location, it has a musical score, and it has a feeling of reality to it that the 1930 film just doesn't seem to have. No matter how many times I've watched it, the end always leaves me feeling as if I had been a part of the story and its effects linger with my being.

Also I must say, the English speaking “Germans” annoyed me a little. Maybe cause I'm German, maybe not, but if you saw Saving Private Ryan (as an American) spoken in German, what would you think?

So overall it is a great movie, definitely worth a watch!

In 1914 a room full of German schoolboys, fresh-faced and idealistic, are goaded by their chauvinistic schoolmaster to troop off to the â€˜glorious warâ€™. With the fire and patriotism of youth they sign up. Their disenchantment begins during the brutal basic training and then, as they board the train to the front, they see the terrible injuries suffered on the frontline - their first glimpse of the reality of war. In the trenches, one by one the boys begin to fallâ€¦ Special Features:
Release date NZ
January 1st, 2002
Movie Format
DVD Region
Edition
Aspect Ratio
Language
English
Stars
Studio
Magna Pacific
Subtitles
English HI
Supported Audio
Genre
Original Release Year
1979
Product ID
1462562