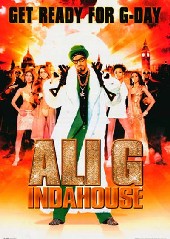 See the superstar of British Comedy as you've never seen him before in the most controversial and hilarious number one blockbuster.

Ali G gets political in his big-screen debut, finding himself in the bizarre position of having to resolve one of the biggest national and political scandals in the country's history. Assisted by his loyal crew, the West Staines Massive and long suffering girlfriend “me Julie”, he emerges as the unlikeliest of heroes – he's invincible, insatiable and of course irresistable to bitches!