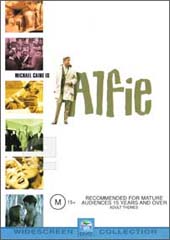 What's it all about… Alfie.

Michael Caine stars as Alfie, a Cockney Casanova, in this outstanding example of 1960s British filmmaking. Alfie is a good-looking charmer, who finds that the Swinging Sixties are a great time to be around in. He's always able to sweet-talk women into bed, and he just doesn't care about the consequences. The film charts Alfie's complex and amoral amour, while he offers his own perspective, addressing the camera with his observations on life and love. Great performances from Caine, and from Shelley Winters, Vivien Merchant and Julia Foster as some of the women in his life, make this drama a memorable depiction of the sexual revolution.