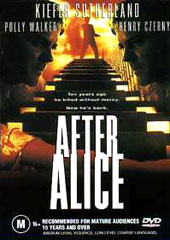 There's murder on his mind.

Michael Hayden, a burned out police detective with an alcohol problem, starts to have visions. At the same time a serial killer nicknamed Jabberwocky starts up again after several years silence.

Hayden meets the strange Harvey who has some knowledge of the crimes and suggests that Michael is capable of receiving psychic flashes and precognitive dreams.

As Michael’s superiors insist that he hound a former suspect in the Jabberwocky case, his visions lead him in other directions, something he has difficulty explaining to them.