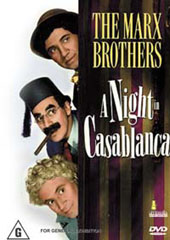 Unavailable
Sorry, this product is not currently available to order
The worldâ€™s most, legendary, loved and revered comedy team.

The Managers at the fabulous Hotel Casablanca in North Africa are dropping like flies. Each is being murdered as he innocently blunders onto the stolen jewels and art treasures that a gang of escaped Nazis have stashed in the hotel.

And so another Manager arrives. It's GROUCHO!

In their last important film together, the Marx Brothers are pulled into one crazy situation after another. The many plot twists put the boys through their hilarious paces, culminating in an outrageous chase scene resplendent with airplane acrobatics!

The boys, as usual, save the day, and the criminals are brought to justice.