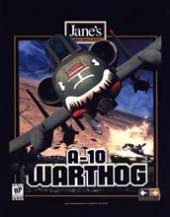 Unavailable
Sorry, this product is not currently available to order
Jane's Combat Simulations presents brutal close-air support in the world's meanest attack jet, the A-10 Warthog. From the creators of the AH-64D Longbow series in cooperation with Jane's top military analysts A-10 Warthog delivers simplicity with precision. Featuring an all-new graphics engine, simplified controls, diverse mission design, a 30mm, seven-barrel cannon and a titanium cockpit that withstands 23mm projectiles.

Single Missions: Choose from a variety of punishing missions:

Training Missions: Interactive training missions will make an ace A-10 pilot out of you in no time.

Multi-player missions for up to 8 players: Risk it all in a Deathmatch or create lethal formations in Cooperative modes via IPX network or over the Internet on JanesCombat.net